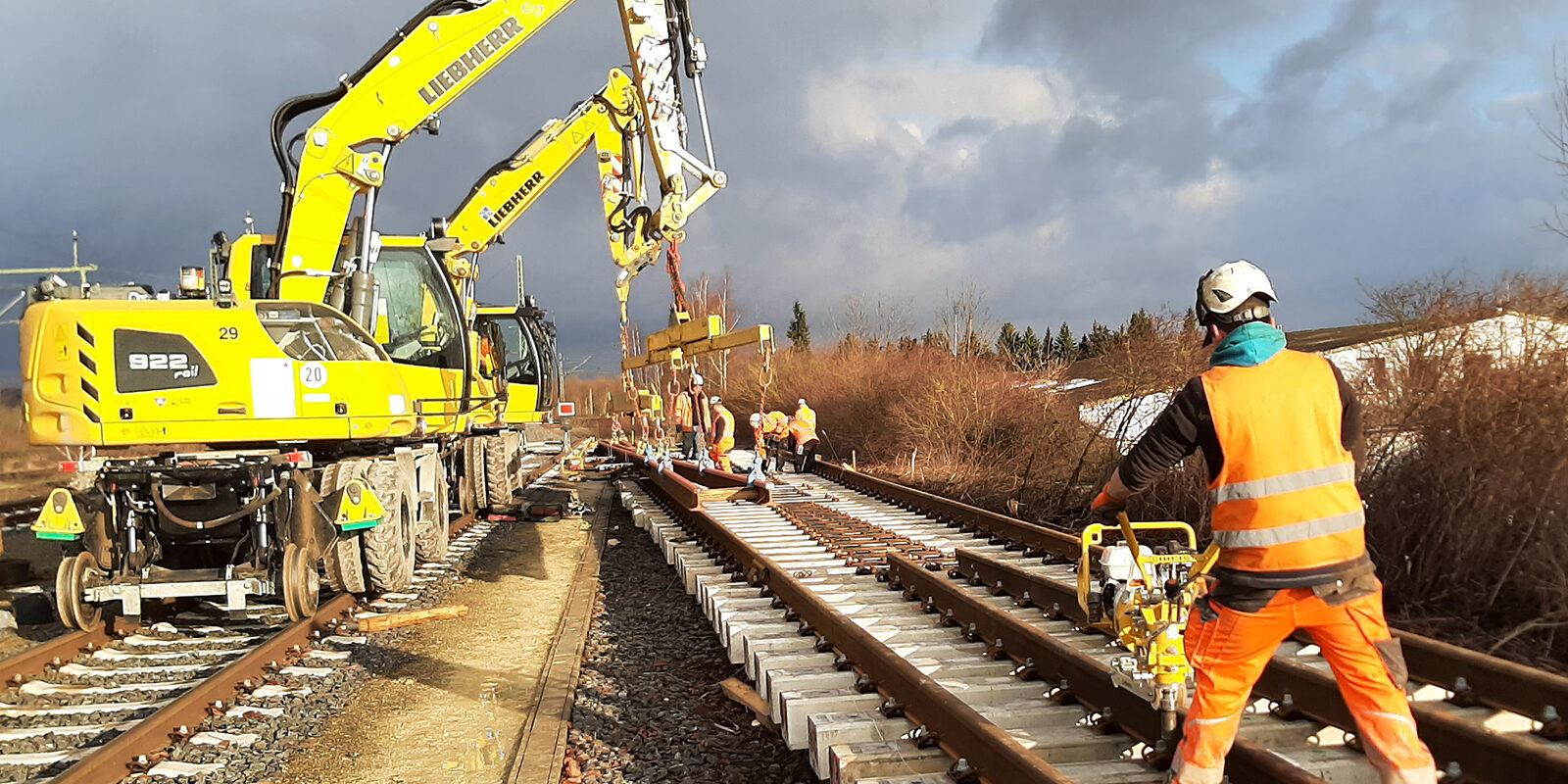 SPITZKE on the high-speed rail line 1733

Revitalisation of a high-speed rail line between Göttingen and Kassel

The high-speed rail line 1733 was built in sections between 1973 and 1991 and connects Hanover in Lower Saxony with Würzburg in Bavaria. Daily, around 110 long-distance trains at speeds of up to 280 km / h use the line. For the revitalisation of the 40 km long Göttingen – Kassel section, SPITZKE is forming a consortium with DB Bahnbau Gruppe GmbH. The revitalisation will largely be carried out using conveyor belt methods within a planned construction time of 84 days (52 days for the track). Follow our work on this construction site ticker.

October 13th, 2021 // Now, it’s finished. In the last weeks of September, our teams performed load tampering passes on the SFS 1733 as scheduled. After construction, newly laid ballasts are not usually sufficiently tilted, and are thus correspondingly still in “movement”. For this reason, load tampering passes are carried out after train operations have been ramped up for several weeks and the renewed track sections have been exposed to greater loads. This involves compacting the track bed again and permanently establishing the final track position.

The successfully completed load tampering passes conclude one of our most exciting, but also most challenging projects which was implemented together with DB Bahnbau Gruppe GmbH and we were pleased to be able to take you along this journey in this project ticker. In a record breaking 84 days, 54 of which were for the upper structure, we worked together with our ARGE partner to reconstruct this 40 km long section of the 1733 high-speed line between Göttingen and Kassel and took mobility in the region a step forward. We were onsite with almost our entire range of experts and many dedicated teams.

We would thus like to take this opportunity to thank our colleagues from SPITZKE and the DB Bahnbau Group for their commitment and support with this ticker – and last but certainly not least, you for your interest in our project.

July 28th 2021 // After the end of the track work, the pre-service testings are currently taking place on the SFS 1733 between Göttingen and Kassel. At the beginning of September, our professionals are once again on the rail line in a few short total closure breaks for tamping passes. In the meantime, we have a few more impressions for you.

June 16th 2021 // After a closure period of 52 days, the time has come. The track work on the high-speed rail line 1733 will soon be completed on time, and the teams from consortium partners SPITZKE and DB Bahnbau Gruppe have a lot of work behind them. Six technical areas from SPITZKE and three subcontractors from the DB Bahnbau Gruppe had to be coordinated and optimally deployed in one construction site, sometimes simultaneously. Only in this way was it possible to achieve such high output in a relatively short time frame. It was a strong performance!

So far, the SPITZKE teams have:

Still, there is a lot to do in the coming days. Among other things, the overhead line systems will be fully inspected, individual overhead line masts will be replaced, work on the control and safety technology will be carried out, and the construction site will be cleared.

June 4th 2021 // Huge strides are being made with the work on the high-speed rail line 1733. The end of the track work is coming soon. We have compiled some photographs of the work since April.

April 30th 2021 // That which has been pre-assembled to fit the track must be put into the track bed in good time. On April 30, teams began with the construction of the first turnout in the area of Jühnde Südkopf. Many more will follow. Precision and perfect timing are required. The transfer point components are transported to the job site by specialized points transport vehicles, which can tilt their loads and thus enable large elements to be transported over the rail network within the structure gauge. SPITZKE’s professionals are expected to complete the last transfer point in the first weekend in June.

Update #5 - First use of large-scale machinery

April 26th 2021 // The green light has now been given for the first shifts with the large-scale machinery. Our RPM-RS-900 formation rehabilitation machine with integrated ballast recycling, named “Katharina die Grosse”, will start on April 26 in the Göttingen section. One day later, the RM 900 S will be used for the first time in the Leinebusch tunnel. The ballast cleaner was equipped with the dust removal system that has proven itself with the SFS 4080.

April 23th 2021 // The time has come. Today at 10:30pm the full closure starts and marks the start of the main phase of the revitalisation of SFS 1733, which SPITZKE is carrying out together with the DB Bahnbau Group.

In order to be able to start the work on the SPITZKE section of the project on time, our colleagues on site have already initiated several preparatory measures. For example, 27 points of 1,200, 760, and 300 radii have been preassembled (Update #2) and were accepted completely free of defects, several construction equipment areas have been prepared, a drainage exploration has been carried out for each of the seven tunnels on the track section, and the overhead line systems have been inspected.

Away from the tracks, our specialists will begin with the construction of a bridge joint on the A7 motorway and, starting April 27, with the renovations on the rocky slope in the area surrounding the Mackenrodt Tunnel.

We wish our colleagues good luck and that everyone stays healthy. You are a great team!

Update #3 - Track laying-crane in use

March 8th 2021 // Preparations for the main works on the high-speed rail line 1733 are progressing rapidly. Today our KRC 810 T track-laying crane with the proper name “Oskar” was in use for the first day on this project on the pre-assembly site in Göttingen. Oskar is used on SPITZKE construction projects primarily for the removal and installation of heavy concrete points, track sections and auxiliary bridges as well as for the installation of civil engineering structures. It can move up to 125 t. During the pre-assembly of the points for the high-speed rail line 1733, Oskar is used to move the already assembled point components and place them with centimetre precision for the next work steps. 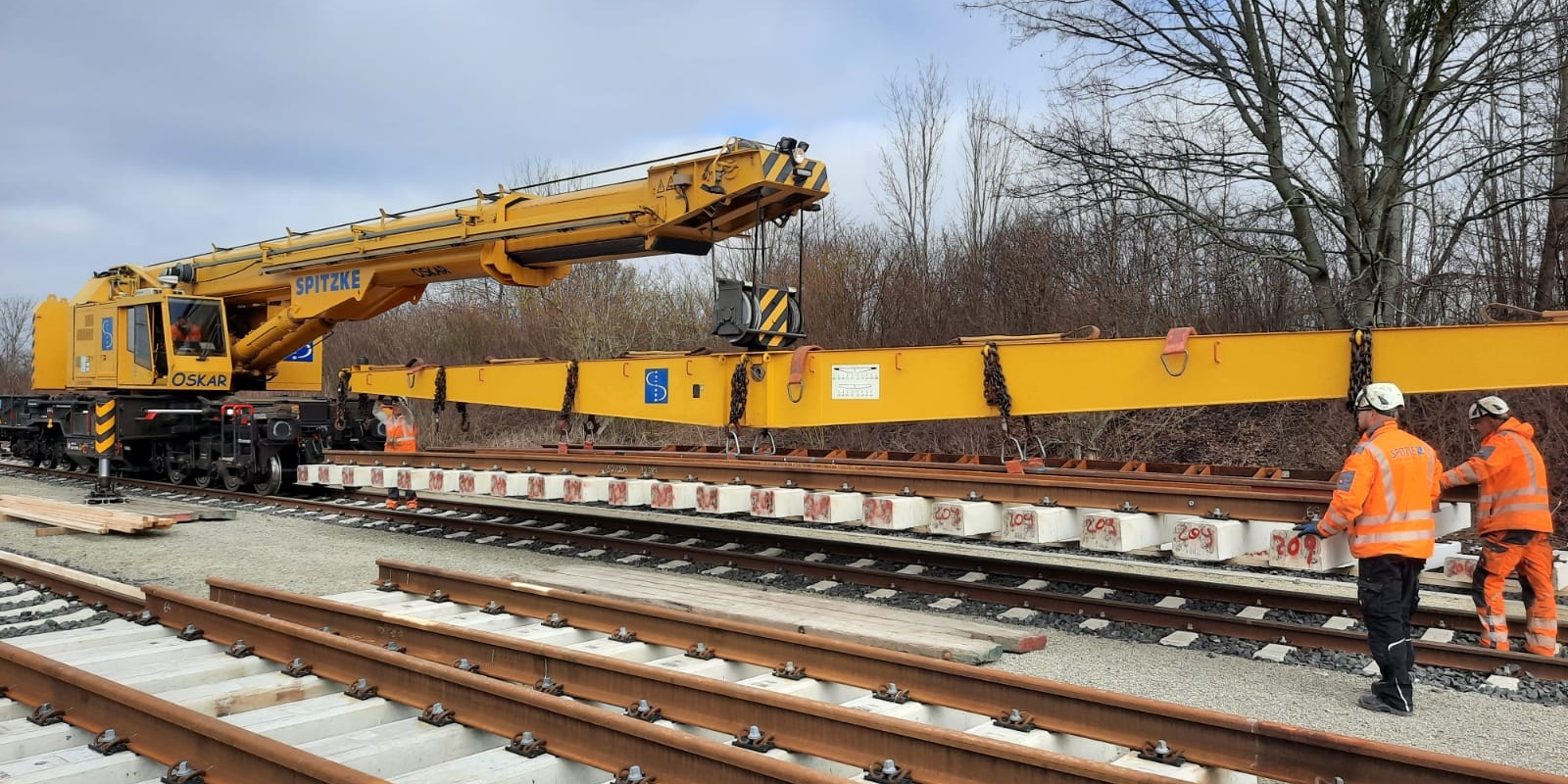 February 3rd 2021 // The section between Göttingen and Kassel has a total length of around 40 km. Alone 21 km are in tunnels – one of them, the Mündener Tunnel, is the second longest railway tunnel in Germany at 10.5 km. The construction project includes 37 km of track renewal, 10 km of ballast cleaning and 25 km of ballast recycling using the conveyor belt methods. In addition, there need to be done 6.7 km of conventional ballast cleaning and 30 km of railway renewal. In addition, 49 points with radii of up to 2,500 m will be renewed on the line. Also, revitalisation measures will be carried out on the overhead contact lines. Furthermore, the construction of a cable routing system and the laying of a optical fibre cable are on the plan.
SPITZKE is realising the construction project together with DB Bahnbau Gruppe GmbH and will use almost its entire range of services on this project. Like the high-speed rail line 4080, the use of track laying machines was also part of the tenders for the high-speed rail line 1733. We will therefore be on site with our UM-S 2001 track-renewal train, the RPM-RS-900 and the RM 900 S. The main work starts on April 23, 2021 and is expected to be completed on July 16, 2021.

Welcome to the high-speed rail line 1733.

In July 2020, SPITZKE, together with DB Bahnbau Gruppe GmbH, was awarded the contract for the revitalisation of the high-speed rail line 1733 Göttingen – Kassel. A special feature of this construction project is above all the time frame of 84 days, which is planned for the renewal of the 40 km long line section. Only 54 days are planned for the track work with this track possession. The main work will begin in a few weeks, but preparations are already in progress. Welcome to the high-speed rail line 1733.

In the coming months we will take you on the construction project, report on our expertise we are using, provide exciting information on current events and let you look behind the scenes of this large-scale project.