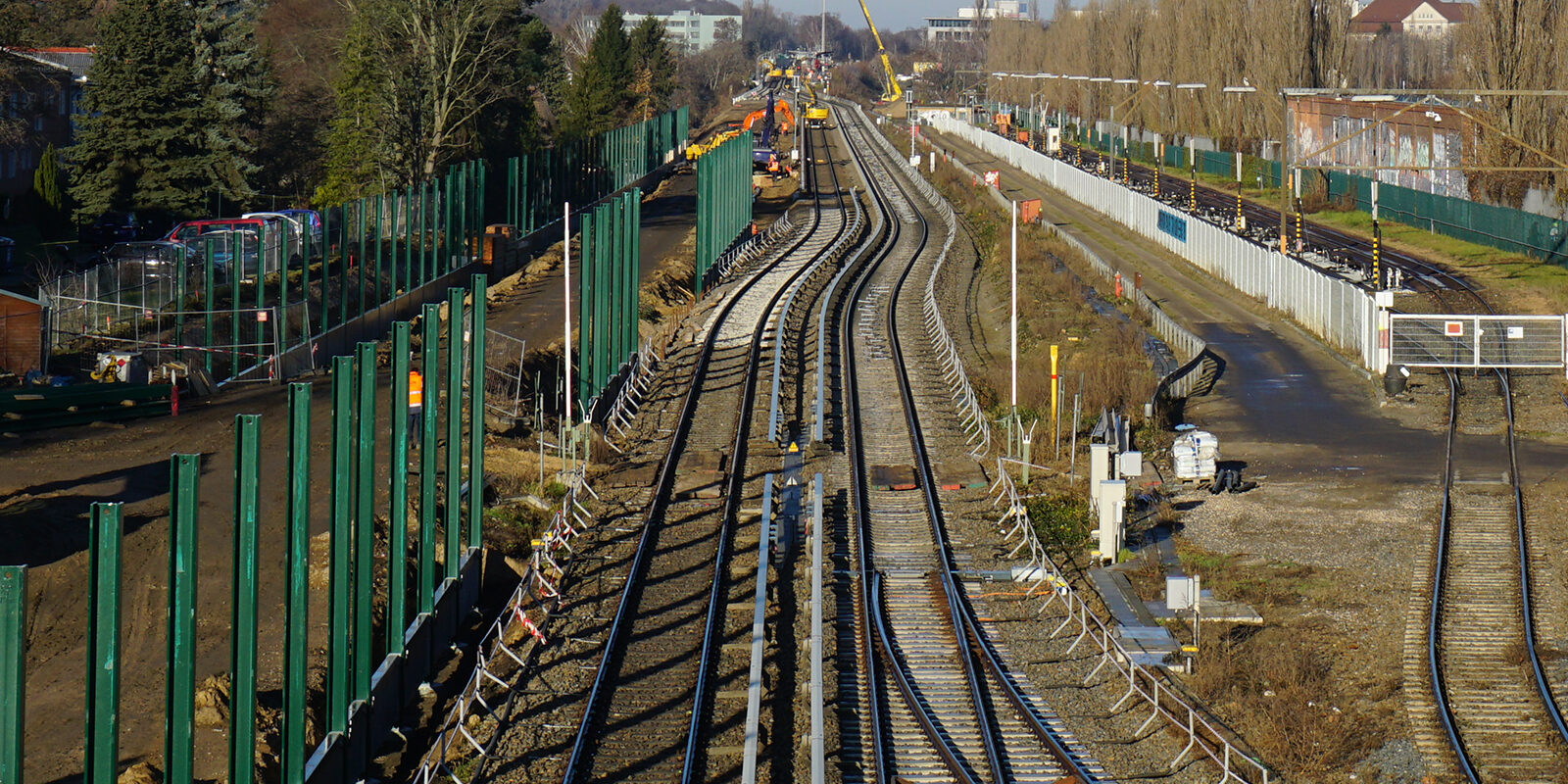 SPITZKE on the Dresdner Bahn

With the expansion of the rail line “Dresdner Bahn”, the Deutsche Bahn AG wants to relieve the Berlin railway junction and enable shorter travel times in the direction of Dresden and Berlin Brandenburg Airport (BER). For this to become a reality, the railway infrastructure company SPITZKE is expanding the line together with JOHANN BUNTE Bauunternehmung GmbH & Co. KG and Hentschke Bau GmbH in the coming years. Follow our work in this construction site ticker.

Update #7 – Signal brackets: from production to equipment and installation

July 16th 2021 // The major summer closure of the Dresdner Bahn is in full swing. As reported, the crews are working tirelessly on the construction stage S 3.500, in which, among other things, three signal brackets are being erected. We get to the bottom of the matter and explain how a signal bracket is created. For the foundation of the signal, a special anchor cage, which was manufactured by SPITZKE subsidiary MuR STAHLBAU GmbH in Naumburg, is used.

When the low loader arrived from Naumburg, the foundation crew from the Leer branch began their work. They first carried out the preparatory work, such as excavating the pit and building the formwork, before the pile driver was used. The pipes, which were more than ten metres long, were driven in, and a clean layer of lean concrete was laid. On top of this, the foundation specialists placed the anchor cage, making sure that it was the right size. Finally, they erected the formwork and tightened everything so that the anchor foundation could be concreted.

In another operation, the three masts for the signal brackets were set up. For this purpose, colleagues from the equipment/​electrical engineering department, the Grossbeeren branch and MuR Stahlbau GmbH were on site. In addition, there were employees from Siemens who installed the signaling technology. With the help of a track construction crane, the brackets and signaling technology were placed on the masts and firmly mounted. Work is currently underway on many sections of the route. In the next update we will give an overview of the status of the work on the construction stage S 3.500 during the 6-week total closure.

Update #6 – After one closure period comes another

June 4th 2021 // Since construction began, 950 foundations have now been laid for noise protection. In addition, the SPITZKE team has installed posts and base plates for sound barriers. The civil engineer cable specialists have also installed 14 crossings, and the track professionals have laid around 2,000 metres of track since January.

The two closure periods in April and May have only just concluded, and the next one is already on the horizon. The Dresdner Bahn team is currently working at full speed to prepare for the big summer closure break from June 24 to August 9. The aim of the closure, which runs parallel to the summer holidays in Berlin and Brandenburg, is the construction stage S 3.500.

The following tasks are to be completed in the construction stage S 3.500:

Update #5 – Project progress wherever the eye can see

March 11th 2021 // The foundation work on the Dresdner Bahn is progressing quite well. Our colleagues have already brought in 787 of the totals of 4,000 foundations. Neither the onset of winter in February nor the spring storms these days could make much of an impression on them.

The punctual execution of the planned 4,000 foundations is the prerequisite for the subsequent erection of noise barriers along the route.

We are keeping our fingers crossed that everything goes smoothly and that the goal is within reach.

Update #3 – the work in Berlin continues.

January 21st 2021 //After the turn of the year, work will continue between the Attilastreet and Lichtenrade stations. In a first track possession from January 29th to February 1st, 2021, rails and sleepers will be unloaded directly from the work train in this area using road-rail excavators. In addition, the specialists in power engineering have the subsoil for the signal bracket at km 7.080 explored. Speaking of security: The explosive ordnance sounding will continue on the following sections from km 10.5 to km 10.8 and km 12.0 to km 13.2 towards the south of Berlin.

Also on the last weekend in January , S-Bahn traction current cables in the track area will be expanded, disconnected and reinstalled after the work of our consortium partner Hentschke. In addition, our specialists in power engineering will install a track block during a second track possession from February 1st to 5th, 2021 to secure the work area. Furthermore, our consortium partner Hentschke uses the track possession to carry out exploration / search shafts and surveying work on the railway bridge Teltow Canal.

December 21st 2020 //On the last Advent weekend there was a lot going on on the Dresden Railway. During a 54-hour track possession from Friday evening, 10:00 p.m. to Monday, 4:00 a.m., our teams from the track and railway traction current, including the machine crew, were active with extensive technology and subcontractors. Four road-rail excavators, four crawler excavators, a mobile crane and tamping machine technology were used.

The precondition for the safe execution of the work was an extensive explosive ordnance sounding of the areas prior to the beginning of the track possession to confirm that the work area was free of explosives.

Despite the tight schedule, it was possible to carry out all the planned work on time and the rail line could be opened again on time for the start of the new week.

Briefely: Renewal of 30,000 m of track, 5,500 foundations, new construction of 16 points and erection of 21,400 m of overhead lines, 25,500 m of noise barrier and several railway bridges for suburban and long-distance trains

October 27th 2020 // In the first quarter of 2020, the foundations were laid by Deutsche Bahn and the consortium so that work on the implementation planning could begin on time from March 2020 and the required, approved implementation plans for the first work were available in good time. Since June 2020, construction sites have been gradually taken over from the preliminary award packages and preparatory work, such as clearing and explosive ordnance detection, has been carried out.

On October 26th, 2020, the time had finally come – our Großbeeren branch started with the first of around 5,500 pile-driving pipe foundations for the noise barriers to be built in the section between the railway bridges Teltow Canal and Kamenzer Damm. A MOVAX system is used for the first approx. 500 foundations, as, due to the requirements of the planning approval decision, deep foundations must be installed with as little vibration as possible. Subsequently, a total of approx. 4,500 m of noise barriers with a height of up to 5.00 m will be completely constructed by the Großbeeren branch and the foundations for all noise barriers to be built will be installed.

We wish the team from the project Dresdner Bahn every success.

Welcome to the Dresdner Bahn

On December 20, 2019, the group of bidders Dresdner Bahn SPITZKE / BUNTE / HENTSCHKE received the order from Deutsche Bahn and the almost 9 months proposal processing was rewarded. As a “Dresdner Bahn VP3” consortium, SPITZKE is working with JOHANN BUNTE Bauunternehmung GmbH & Co. KG and Hentschke Bau GmbH to expand the Dresden railway between the Berlin-Südkreuz station and the border in Lichtenrade.

In the coming months we will take you on the construction project, report on our competencies we are using, provide exciting information on current events and let you take a look behind the scenes of this large-scale project.