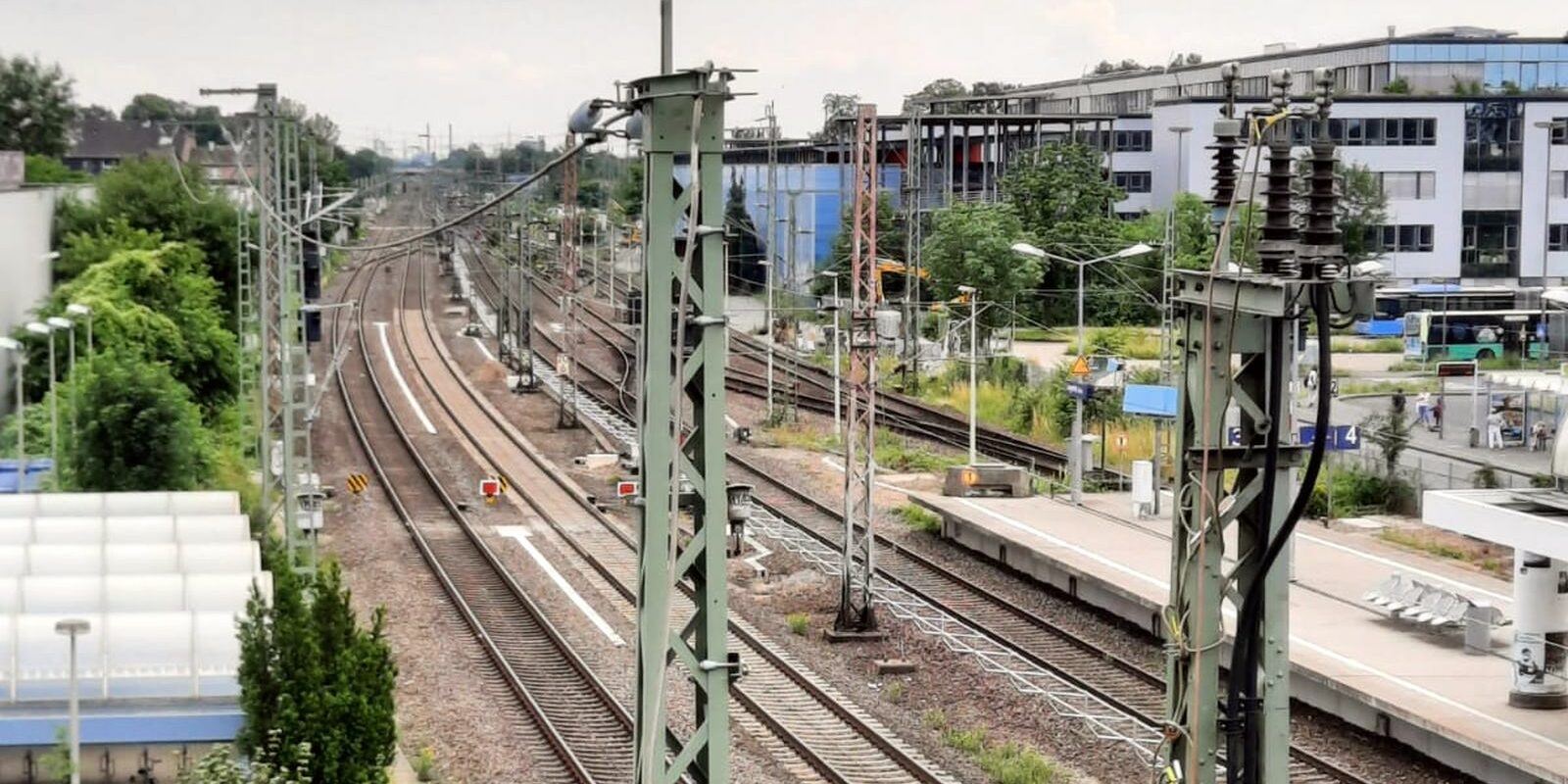 The monumental project in the metropolitan region of Germany

Hundreds of thousands of commuters and travellers use the railway every day in the Rhine-Ruhr metropolitan region. The RRX is intended to replace the current regional traffic, which runs on single lines every hour, and provide a networked interval of 15 minutes. SPITZKE’s Equipment/​Electrical Engineering Division  is responsible for the overhead contact line systems in this huge rail infrastructure project, which is part of the 2030 Federal Transport Infrastructure Plan.

Update #10 – A Break on the Rhein-Ruhr Express

Spring 2022 // Work on the RRX is paused – at least from SPITZKE’s point of view. This break in our services on the electrification of the Rhein-Ruhr-Express is according to plan and is a part of the construction project. During this time, other maintenance teams and third-party companies are continuing their work on the line between Leverkusen and Langenfeld. We will continue our work at the beginning of June – this time with a 14-month total closure.

Would you also like to be involved in advancing the railway infrastructure between the Rhine and Ruhr and help shape the climate-friendly mobility of tomorrow? Our Competence Center West in Bochum is looking for an electrical engineer (m/​f/​d) as a planning engineer (m/​f/​d) for the areas of overhead lines as well as EEA/​50Hz.

You will also find other exciting positions in our career portal.

November 19th, 2021 // Our colleagues from the Western Regional Headquarter and the foundation teams from our Leer branch took advantage of the last closure of the year in October and made great progress. At the end of October, stage 2 was successfully accepted for all construction steps for the Rhein-Ruhr-Express railway project.

The foundation team installed several masts for the final stage. In addition, old masts, which were no longer needed, were dismantled. Work on the catenary followed the foundation tasks: over 2 km of catenary was pulled and regulated in only a few weeks. In addition to setting up more switches, other minor work was completed on mainline track 2650b during construction phase 2. After the catenary was hung, approx. 20 old masts were dismantled.

This meant that the SPITZKE team from Bochum was not only on schedule, but they had also anticipated the first work for the upcoming construction stage. The shutdown in the fall ended with the acceptance of construction stage 2 and the so-called Dozzler run – during which the height and positioning of the contact wire was recorded and checked.

Update #8 – The next total closure of the RRX is pending

October 8, 2021 // The second construction stage for project section 1.2 for the electrification of the RRX in Leverkusen and Langenfeld has been completed. The cables for the local control equipment are the only items still missing. This is due to worldwide supply shortages of plastic and copper, and they will be installed later. However, the missing local control equipment has not stood in the way of the client’s acceptance of the construction status.

During the last weeks, SPITZKE’s colleagues from KPZ West have focused on preparing for the upcoming closure period from October 8th- 22nd. The precision adjustments on section 1.3 for the long-distance railway track 2650a have already been completed. Now the electrical engineering/​equipment experts are turning their attention to the opposite track, the long-distance railway track 2650b. Mounted parts, such as wheel tensioners and their associated weights, as well as remote switch mechanisms have been mounted on the masts there. These preparatory measures serve to pull the catenary and allow for the erection of additional masts during the total-closure period, which will begin with the implementation of the grounding concept.

Construction stage to be accepted as a whole

The acceptance of construction stage 2 for both sections 1.2 and 1.3 is also planned for the next two weeks. In addition to their own contract, the SPITZKE crews from Bochum are supporting Deutsche Bahn with other parts of the RRX construction project. For instance, swiveling catenaries and the laying of signal foundations were agreed upon as additional services.

The professionals working on the overhead lines will change their work rhythm from night to day shifts during the total closure. The foundation crew from Leer will work day and night. The foundations will be primarily stepped foundations and 21 masts will be erected. Some of them will be on the S-Bahn side as they will be relevant for the upcoming construction stages.

September 1st, 2021 //After the main work of construction stage 2 in section 1.3 between Leverkusen-Rheindorf und Langenfeld-Berghausen started in August, the overhead line specialists managing following work. Since mid-August onwards, the remaining work will be carried out during nightly shutdowns. This includes, for example, the installation of the hangers on which the contact wire is suspended.

Injuries After the Explosion at Chempark Leverkusen

On July 27, the SPITZKE team experienced a shock. The explosion at the Chempark in Leverkusen took the foundation crew by surprise while they were working. “The pressure wave after the explosion was enormous; I felt it clearly even in the car”, reported one employee. Afterwards, some colleagues were taken to the hospital for evaluation. All SPITZKE employees are recuperating, and it is foreseeable that they will soon be fully recovered.

Update #6 – Construction Stage 2 in Section 1.2 of the Rhein-Ruhr-Express in Leverkusen Completed

August 4th, 2021 // The SPITZKE team on the Rhein-Ruhr-Express construction project has taken an important step towards its electrification. With regard to the overhead line technology, construction stage 2 has been completed and successfully approved. What are the services behind construction stage 2?

In section 1.2, the SPITZKE experts from the Western Regional Headquarters installed and tamped the masts of the new overhead line. The entire catenary renovation has already been carried out. This created the conditions for the catenary pulling work to begin on August 1.

Catenary and Feeder Lines are Pulled

In construction section 1.3, between Leverkusen and Langenfeld, the foundations and mast installation at long-distance railway track 2650a for construction phase 2 have been completed. The overhead line specialists have also completed the pulling of the catenary. This was followed by the precision adjustment. Here, the overhead line specialists from Bochum have already pulled and installed two feeder lines.

Update #5 – During the long closure period, work on the new catenary begins

July 5th 2021 // Since 10 p.m. Friday evening, the major closure of the Rhine-Ruhr Express (RRX) has been underway, during which time the main work on the catenary for construction stage 2 is being carried out. The total closure runs parallel to the summer holidays in North Rhine-Westphalia. The long-distance railway line will be closed during the entire summer holiday period; the S-Bahn line will be closed only during the first and last week of the holiday.

Among the preparatory measures was the implementation of the earthing concept. In this process, the switches were bolted out and secured. After the construction track was set up, the overhead line specialists swung the feeder line at one point in order to clear the construction site for the foundation crew from the Leer branch. They are currently working day and night shifts to set up the last masts in planning approval section 1.3, and will then move on to planning approval section 1.2.

May 31th 2021 // Snapshots of the electrification of the RRX between Leverkusen and Langenfeld.

April 16th 2021 // After the first full closure on the Rhine-Ruhr Express, the project has picked up speed for SPITZKE. Work on the RRX is in full swing and the overhead line work has also started. Almost 6 km of line was checked and readjusted, and the height and lateral position of the catenary was checked by optical plummet and faulty brackets were adjusted.

Work is progressing not only in the air, but also on the ground. The foundation specialists from our Leer branch drilled 44 mast foundations in just a few days, twelve of these have already been concreted.

As it is unfortunately not possible to store the necessary materials in section 1.3 between Leverkusen-Rheindorf and Langenfeld, they had to be delivered from section 1.2. 8 km away. Space in general is one of the major challenges during construction work on the RRX. A very large number of people are working in the construction area and the tracks of the project sections are closely surrounded. Despite the additional time required, the closure was very successful, according to our project manager from our Western Regional Headquarters.

The SPITZKE team is highly motivated and currently working mainly in night shifts, as the line is closed to mainline traffic at night. Work between mainline and urban railway is only possible during full closures because the tracks are too close together. And so, during this time, our teams continue to set up along the line, pre-assemble masts, extend and erect them.

March 26th 2021 // Project start for the overhead line work on the Rhein-Ruhr-Express: This weekend, SPITZKE’s work on the new overhead line really gets underway. After a lot of preparation, the first closure period heralds two work-intensive weeks for the Equipment/​Electrical Engineering Division and the foundation crew of our Leer branch. From March 27th to April 9th, the line between Leverkusen and Langenfeld will be fully closed. In order to make the best possible use of the tightly scheduled time for all foundations and overhead line work, the sections of the line on which many different companies and trades are working in parallel were prepared accordingly in advance.

In addition to the logistical and organisational parameters involved in such a large-scale project, special attention must be paid to safety. To ensure that the overhead line is not accidentally energised remotely, 26 switches had to be manually locked, which will be reactivated after the closure period.

In the last two weeks, not only was the closure period prepared, but the construction site was also set up, among other things. We will report in three weeks what SPITZKE has implemented in the first full closure on the RRX.

Update #1 – Leverkusen section is being prepared for RRX.

March 5th 2021 // The RRX is a railway infrastructure and mobility project that was launched in 2006. In 2013, the state of North Rhine-Westphalia signed the basic agreements and in 2017, the expansion and reconstruction of the railway infrastructure began. Work on the Leverkusen section has been underway since March 2020. Within three years, the track expansion will be advanced to 3 km to make room for the RRX.

SPITZKE will take over the overhead contact line system work, coordinated by the western regional headquarters, in the period from 2021 to 2023. Preparations are underway and the planning phase is nearly completed. The final structural inspection is still underway before the official plan can be approved.

The construction areas have been set up and the probing for the foundations have been completed. SPITZKE is currently working on the final pre-excavations. Now, the relocation of a local control equipment cable and the implementation of the earthing concept for the first total closure for Easter are still pending.

From 27 March, the specialists from the SPITZKE branch Leer will start with the foundations, and work on the overhead contact line systems will start at the beginning of April.

Welcome to the region between the Rhine and the Ruhr!

Springtime is construction project start time. In March, a new large-scale project for SPITZKE starts in North Rhine-Westphalia. The ambitious Rhine-Ruhr Express railway project, which is being built until 2030, will reorganise the railway network between Cologne and Dortmund. The main goal is more direct connections every 15 minutes between the two major cities for millions of passengers. The current infrastructure is not sufficient to increase capacities and overcome bottlenecks, e.g. because long-distance and regional trains still use the same tracks.